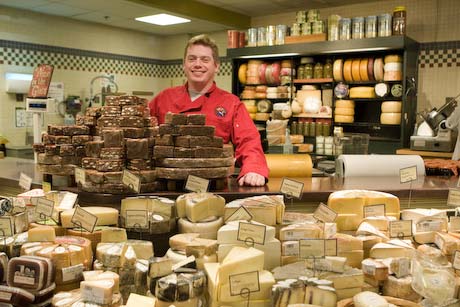 This month marks the eighth anniversary of Whole Foods’ first store opening in South Carolina right here in Mount Pleasant. The grand opening week kicked off on May 17, 2004, with a benefit for the Lowcountry Food Bank, and the official store opening occurred at 10:00 a.m. on May 19 with celebrations continuing through the weekend. According to the Austin, Texas–based grocer’s South Region president Ken Meyer, the Charleston area was the natural choice for a new Whole Foods Market: “Becoming a part of the greater Charleston area is exciting … because of the city’s sophisticated food culture. Many people in Charleston share our passion for fresh, delicious, high quality natural food, making Whole Foods Market a perfect fit.”

The original Whole Foods Market came to fruition in 1980, a time when the United States had less than six natural food stores in existence throughout the entire country. By 2004, the grocer had expanded into Canada and the United Kingdom, and 2011, there were over 300 Whole Foods locations worldwide with plans to more than triple that number to 1,000. The natural-food giant has earned quite a name for itself, from loyal foodie followers (the Austin, Texas, Whole Foods Facebook page has 919,915 likes) to more cynical shoppers who have nicknamed the store “Whole Paycheck” because of its high prices. There is even a real estate phenomenon known as the Whole Foods Effect.

According to this theory, the opening of Whole Foods store in an area seems to have a huge positive effect on surrounding real estate values. Whether Whole Foods has a sixth sense and can predict that an area is on the verge of a boom, or the presence of the store is the catalyst for growth in an area (or both), having a Whole Foods in the neighborhood seems to be a good omen.

Experts say that having a Whole Foods in your neighborhood is a positive thing because the company is healthy and carries no debt. And the availability of higher quality food will certainly attract folks who are interested in a particular quality of life. So, did the opening of Whole Foods Market affect Mount Pleasant real estate? Here are some home sales and prices numbers. I’ll let you make your own conclusions.

Did Whole Foods attract more upscale businesses to the vicinity? Perhaps … The Houston Northcutt Boulevard area is now home to Eurasia Cafe & Wine Bar, a posh eatery that focuses on seasonal local ingredients and craft brews; Dolittles, a pricey pet boutique; Graze, another high-end restuarant with one-of-a-kind dishes; Mom Spa, a full-service day spa; and Eco Fitness–Blue Turtle Yoga, which is located in the old Wal-Mart. But to be fair, the BMW dealership, which is just down the road, has been here since 1998, well before Whole Foods moved in. Though, it’s a pretty safe bet to say that Trader Joe’s is here thanks to Whole Foods!

Whole Foods opened another South Carolina store in Greenville in 2006, and these locations remain the only two in the state thus far. The grocer does have a formula it follows when looking for places to open a store: a population of around 200,000, mainly college-educated folks need to live within a 20-minute drive of the store. You can read more about the Whole Foods effect by following this link, and you can listen to an NPR story on the pros and cons of the phenomenon here. There are numerous amenities in the Mount Pleasant area, and if you are considering purchasing property here, I am more than happy to discuss area amenities and lifestyle. I can be reached at 843-345-6074.