The Charleston County School District is expected to open its new 6,000 seat stadium by the end of August, according to the spokesperson for the district. The District 2 Stadium is located on Wando High School’s campus in Mount Pleasant.

The stadium is planned to be open by Wando’s first home football game on August 31. There are less maintenance costs ahead with the facility because of its synthetic turf playing field. The athletic director at Wando, Bob Hayes, says he won’t have to cut the grass anymore. “We love the old stadium we love the tradition there, but we’re excited about this new one,” Hayes said.

The head football coach at Wando, Jimmy Noonan ,says his players are counting down the days. “It’s a tease, what it is,” Noonan said. “They’re practicing back there on the grass and in the swamp with all the recent rain so they’re anxious to get out here just like the coaches are.” Their previous stadium was about 7 miles away.

The new one is equipped with a giant digital scoreboard, a concession stand and air conditioned press boxes and halftime rooms for teams. Although the stadium is on Wando’s campus, Lucy Beckham High School which is expected to be open next year in Mount Pleasant will also use the new stadium.

“Anytime there is something new there is going to be excitement, it’s not only new it is in my opinion going to be one of the premiere stadiums in the state,” Hayes said. “That’s special and it should be, that’s what our kids deserve in the school district and our district folks have taken that an run with it.” The facility will have concessions, restrooms, a field house and an available perimeter space that the community could use.

“There’s not a coach out there that doesn’t like new bells and whistles,” Noonan said. “Like a chef, the new pots and pans are nice but it’s all about the ingredients you put out there.” So far the bleachers are in on both sides and the field turf has been installed. The final inspection is scheduled for August 29, according to the school district. The 16.5 million dollar stadium will also be used for lacrosse, soccer and track and field events.

The Executive Director of Capital Programs for the district Reggie McNeil says there’s space in the front that could potentially be used for community events. “I’ve got to say, what I’ve seen in the past six and a half months is something that everyone will be pleased with,” McNeil said. Construction started in January of 2018. The Charleston County School District is currently taking bids for the naming rights of the new facility. The district is also working on design plans for a regional stadium in North Charleston that four high schools will share. 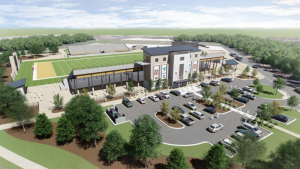