In March 2014, Charleston County Public Libraries announced a proposal to modernize the library system. In November of that year, a referendum was passed to renovate 13 of the CCPL’s facilities and to build five new library branches. Construction on the Mt. Pleasant branch, located in the northern area of Mt. Pleasant in the Carolina Park neighborhood, will begin Tues. July 25, with a groundbreaking ceremony held at 10 a.m.

This 40,000 square foot facility will serve “the growing Mt. Pleasant population, which continues to expand north up Highway 17 — way past Mt. Pleasant Towne Centre and the Isle of Palms Connector, which were considered the far reaches of the town just five or six years ago.” Architectural firm LS3P presented their design for the Carolina Park branch in January 2017.

This new library will provide an additional option to Mount Pleasant’s existing library on Anna Knapp Boulevard.  The new facility is designed to offer both increased space and the latest in technology.  “We’ll have plenty of study space, venues for community meetings, more young adult resources and lots of new books,” said Doug Henderson, executive director of the Charleston County Library System. “We want it to be a flagship library.” 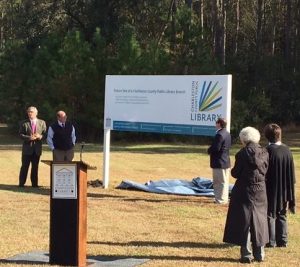