The construction of a Charleston County School District (CCSD) regional stadium was voted on in 2014. A priority list was included in the bond referendum that appeared on the ballot that year and approved by county citizens. Since then, district officials have scouted property across East Cooper that would be suitable for a 6,000-seat regional stadium and associated parking. The most recent feasible option for construction of the facility is property located in Carolina Park, across from the main Wando High School campus which has the largest student body population in the state.

Beckham stadium which is the current stadium, will be used next year for the last time and the new one will be open for the 2018-19 fall sports season. CCSD board chairman Kate Darby explained, “For the time being the district is committed to a regional stadium for East Cooper (and North Charleston). It is a win-win for everybody,” said Darby. And while academics and test scores and student achievement is most important, “it is time for Charleston County School District kids to have more improved athletic facilities than we have had in past.” 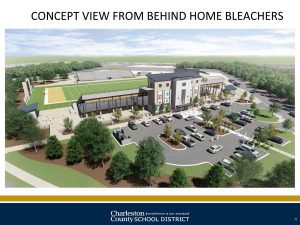