Lowcountry Land Trust (LLT) announced the acquisition of the 600-acre Hyde Park Plantation in the Cooper River Historic District. The property includes more than 100 acres of rice fields and nearly 500 acres of upland forest as well as a main house, servant’s quarters, and guest house. This purchase brings the total number of protected acres in the Cooper River Corridor to more than 49,000 and is the 13th property protected by LLT in the Corridor. The Cooper River Fund, established by the S.C. Port Authority (SCPA), provided the majority of the funding for the $3.5 million purchase. The remainder was privately financed.

“Hyde Park Plantation has extraordinary historic and ecological value and is located in a remarkable area of the Lowcountry,” commented Ashley Demosthenes, president and CEO of LLT. “Without the innovation and commitment of the SC Port Authority to create a fund specifically to conserve high-value properties in the Cooper River Watershed, this purchase would not have been possible.”

“The Port is proud to play a role in the important conservation effort that will be fulfilled through the purchase of the Hyde Park Plantation,” said SCPA president and CEO Jim Newsome. “Just as the Charleston Harbor Deepening Project will generate lasting positive impacts to our state’s economy and global competitiveness, the protection of the Cooper River Corridor is extremely significant to our region,” Newsome said. “The Port is committed to responsible environmental operations and celebrates this milestone with our partner, LLT.”

Hyde Park Plantation was a 1790s “mooring,” or getaway, for the Ball family who also owned the adjoining Kensington Plantation to the east. On the west, Hyde Park is joined by Bossis Plantation, now part of the South Carolina Department of Natural Resources’, Bonneau Ferry WMA. Plats dating to the late 1700s show roads, ponds, and fences indicating that Hyde Park, like its neighbors along the Cooper, was a working plantation. Since the mid 20th century, the property has been managed primarily for timber.

“Historic Charleston Foundation is delighted that the Lowcountry Land Trust has acquired Hyde Park Plantation,” commented Winslow Hastie, chief preservation officer, Historic Charleston Foundation. “The Foundation worked in the mid-1990s to list much of the surrounding area on the National Register of Historic Places. Acquisitions such as this one recognize the area’s importance to both history and land conservation and provide long term protections to this special part of the Lowcountry.”

The Cooper River Fund was established in 2014 with $5 million in mitigation funds from the Charleston Harbor Deepening. In 2015, Lowcountry Land Trust purchased the French Quarter Creek tract. For both properties, LLT will commission a comprehensive land and habitat management plan to restore native upland habitats, place the properties under easement, and sell the properties. The proceeds will return to the Fund and allow for further conservation of properties in the Cooper River Corridor. (Credit: The Moultrie News) 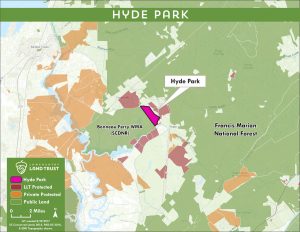