GRACE and GRIT To Open in Mt. Pleasant

GRACE and GRIT to open in Mt. Pleasant with a focus on good ole fashioned Southern hospitality:
Frank Kline wants to bring back the beaten biscuit. In case you are not familiar, the beaten biscuit is a 19th century southern staple, which, according to Kline, was served with seasonal jam to guests upon entry into old Southern homes. His soon to open Grace & Grit restaurant will be reminiscent of this homey, welcoming scene. Grace & Grit is located on Wingo Way, right at the end of the Ravenel as you enter Mt. Pleasant. It’s a fitting location, between the hip peninsula and the increasingly suburban Mt. Pleasant.
Kline, who is responsible for recreating the menu and atmosphere of Acme Lowcountry Kitchen, is a lifelong Lowcountry resident and chef with connections to a multitude of local fisheries and farms. He says that he plans to have five to eight local fish on the menu each night, along with shrimp, sourcing mostly from Wando and Shem Creek, but also potentially from Carolina Seafood in McClellanville.
While Kline says that the menu will inevitably vary depending on the season he wants “to make it as real and as fresh as possible, but also consistent. There will be a focus on seasonality with staple items as well. The shrimp might be fresh or frozen, but it will always be local.”
In addition to seafood, Kline’s other major focus will be, of course, grits. “I’ve been waiting for the opportunity to go crazy with grits,” says Kline. Pre-opening he’s looking at just under a hair of 25 different grit dishes. From sweet to savory — think bone marrow grits, goat cheese grits, and peaches and cream grits, to name a few — the grits will be sourced from Adluh Flour out of Columbia, S.C. Kline says that they’ll be using Adluh cornmeal, flour, and grits, and eventually plan to retail Adluh grits in the restaurant. There will also be a range of non-seafood items, Kline assures, as well as a full bar — including eight local craft beers on draft and a variety of local cans — and some fun, throwback decor. We’re talking major throwback. The hostess stand is built around a piece of the old Grace bridge, salvaged from a scrapyard in Hollywood, S.C. and there’s the new bridge built out of oyster shells in the middle of the restaurant. Kline says there are also old maps from the early 1900s of Lowcountry waterways on display. “It does have a modern feel on the outside, but we’re gonna bring the Southern feel to the inside, from service to food.” 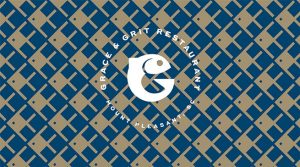