Expanding the Arts in Mount Pleasant

The Town of Mount Pleasant Education Committee is in informal discussions about donating money to the Charleston County School District (CCSD) to expand the performing arts center at the future Lucy Beckham High School so that it could also be used by the community and arts groups. Cultural and performing arts are important to many in the community. So much so that an effort is underway by a non-profit group called Mount Pleasant Community Arts Center (MPCAC). The Community Arts Center would include a theatre, art gallery, gift shop and studio rental space

The primary focus would be to upgrade the audio, visual and acoustics beyond the basic things in a traditional school auditorium. When their envisioned community arts center is built, it will be run by a board, a general manager and an artistic director. There will be a resident theatre group that also performs children’s theatre, a music group and arts group. The center would also be rented out for events and other performances. 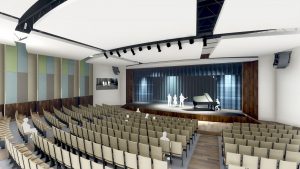