The USS YORKTOWN (CV-10) was the tenth aircraft carrier to serve in the United States Navy. Under construction as BON HOMME RICHARD, this new Essex-class carrier was renamed in honor of YORKTOWN (CV-5) sunk at the epic Battle of Midway (June 1942). Built in an amazing 16 ½ months at Newport News, Virginia, YORKTOWN was commissioned on April 15, 1943. World War II’s famous “Fighting Lady” would participate significantly in the Pacific offensive that began in late 1943 and ended with the defeat of Japan in 1945. YORKTOWN received the Presidential Unit Citation and earned 11 battle stars for service in World War II. In 1975, this historic ship was towed from Bayonne, NJ to Charleston SC (Mt Pleasant) to become the centerpiece of Patriots Point Naval & Maritime Museum.

Patriots Point Naval & Maritime Museum visitors will have the chance to meet more than 80 USS Yorktown veterans who served aboard the ship from World War II until its 1970 decommissioning during the ship association’s 70th annual reunion Oct. 11 – 13. In total, more than 250 people will attend the three-day event, including WWII veterans.

The 70th annual USS Yorktown Association Reunion coincides with the year-long celebration of the aircraft carrier’s 75th anniversary. During the three-day event, the association will unveil a new digital kiosk that contains every USS Yorktown cruise book that was printed and the names of many members of each crew. The Yorktown Association kiosk will be located on Tour 5 aboard the USS Yorktown and will be open for visitors to explore.

USS Yorktown Association Reunion events open to the public include:

Saturday morning, the USS Yorktown Association will host a “Meet and Greet” session for museum visitors. Crewmembers participating will represent all major U.S. conflicts that the aircraft carrier served in. Following the conclusion of the meet and greet, four F-16s from the 169th Fighter Wing at McEntire Joint National Guard Base will conduct a flyover above the Yorktown between 1:30 – 2p.m. All USS Yorktown Association Reunion events will be included in the normal price of admission for non-reunion attendees. Parking is $5. 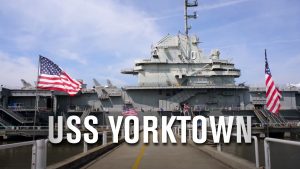