Carolina Park is fully up and running.  The neighborhood is a massive mixed use development in north Mt Pleasant, SC.  There will be approximately 1,700 homes, restaurants, play parks, and 110 acres of recreational space. Carolina Park is bordered by Park West, a similar planned community just to its South. Carolina Park has an array of homes, from starter to luxury homes. DR Horton and David Weekly are the main production builders. Many local mom-and-pop builders are helping add to the diversity in building style. Riverside, a subsection of Carolina Park, is at the upper end of the price point and many homes sit on larger lots. I like Carolina Park for the long-term, but anyone buying in the near future can expect to deal with construction vehicles for a while. If you want to take a tour, please call me, Bob Brennaman at 843-345-6074.

We’re heading into North Mt. Pleasant and CAROLINA PARK. This is about as far as you can go out and still remain in Mt. Pleasant. It borders the Francis Marion National Forest and above us is Awendaw and McClellanville. CAROLINA PARK sits right up to Wando High School, one of the top high schools in the United States. A lot of times when families move here, their kids will be going to Wando High School, so this is a great set up. CAROLINA PARK got started some time ago before the first recession and everything stopped and it went through bankruptcy twice. It has restarted and it’s rolling ever since. I am really surprised when I go online and see all the houses under contract. It has been very well received. There are going to be about 1700 single family homes, and 500 multi-family homes on about 1700 acres. There will be commercial areas but they haven’t actually fleshed that out yet; there is a church. I don’t know if this is actually fact, but I’ve been told there will be a Target, but there is a lot of room for commercial growth. Over to our left as you first come in is the Amenity Center. They have a junior sized Olympic pool with a water slide and water features. So this is the very beginning of CAROLINA PARK and we’ll ride all through, but they just finished the Amenity Center which was finished last summer. A lot of families like CAROLINA PARK because if you have children, an Amenities Center is certainly a plus. Its great for entertaining your kids during the summer. They are building tennis courts, but they’re not quite done. There will be soccer fields and lots of recreational opportunities; trail systems.

Next to the Amenity Center, some of the builders in CAROLINA PARK, have built ‘spec’ model homes. These model homes are open 7 days a week, probably a couple of hours on Sunday. The various builders like Cline Homes, David Weekley, Sabal Homes, Ryland, who is a big national builder, and Structures Building Company, who if you have plenty of money, Structures is a phenomenal builder. We’re going to ride through…..I don’t want to say it’s starter homes, because at $400-$500K, it’s certainly not a starter home. These homes to the right were built by Ryland and the homes on the left, by David Weekley. You can research these guys online. I’ve sold a lot of their houses over the years and I’ve always thought they went over and above what they needed to do to make people happy. They’ve taken this type of Charleston architecture…..colors, double porches, screened porches off the back. The lots are not that big. I think that’s one reservation some people have. Some people don’t want a yard to take care of, but I have taken people here and for them, the lots are not big enough or there isn’t enough privacy, so I think it just depends where you sit on that spectrum of buyers. Again, a lot of houses have been built and we’re on Crane Creek Road. This section was built by Ryland and we’re going to hop across the street to the homes built by David Weekley in just a second. 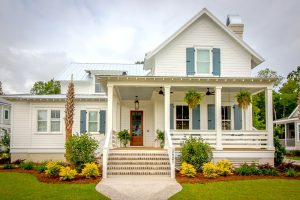 Anticipation has been running high as we’ve approached the release of Bolden Grove, Riverside’s newest custom homes neighborhood. That anticipation has reached a fever pitch with news that for a limited time, homebuyers will have the rarest of opportunities. Starting December 12th, and running for one week only, buyers will have Unlimited Access to select their perfect lot from this limited collection of 27 exceptional homesites – on the lagoon, with views of protected woodlands, or near Bolden Park – and then work with any one of our 7 highly acclaimed custom builders to choose and customize a plan from the Riverside portfolio. After this Unlimited Access period expires, our builder team will purchase the remaining homesites and begin planning and construction of speculative custom homes.  Homebuyers will still have the ability to work closely with their builder and select a host of features and finishes to completely personalize their new home.

So we’re going across the street from the Ryland section over to the Weekley section. David Weekley, is a national builder. He’s built all over Charleston and the United States. If I was going to pick a builder, I would choose David Weekley over Ryland. It’s just my personal preference. I don’t think there is that much of a difference. I do think that Weekley puts a little more into his houses than Ryland does and as we ride through this neighborhood, its very similar architecture that we saw across the street at the Ryland Homes. There is a palette of Charleston colors.

So we’re in CAROLINA PARK, and we’re headed to the back of CAROLINA PARK, at least as it stands now. There’s more development that will happen as time goes on. We’re heading to the subsection called RIVERSIDE and there are more or less custom ‘spec’ homes here which means there are custom builders who are building these houses and they are Jack Burton, Cline Homes, Structures Builders, that I mentioned earlier, Jackson Built Custom Homes, a lot of those guys build in some pretty high end neighborhoods like Daniel Island and in Mt. Pleasant, so very well built homes. They’re going to be a step up from the area we just rode through that Weekley and Ryland built. The thing that people like about RIVERSIDE, and that I personally like, is that there is more space between homes. Most of these are on about one third acre and as we get back further, you will see, we’re shooting this in the beginning of April and they have just built these in the last year or so and the trees haven’t grown in, but in 7 or 8 years, the streetscape will be must prettier than it is now. I ride people back through here all the time and they gravitate toward this type of architecture; big porches. Pretty good green space. These homes back up to woodlands buffers and wetlands, in certain spots. Home prices are pretty high, honestly, I think, for as far out of Mt. Pleasant as we are, but I do like CAROLINA PARK and I do like RIVERSIDE. Home prices range from the high $500K to $700K’s or low $800K’s, depending on who built the house. I do like this section and it will be further developed out. They’re actually selling some water oriented lots on a lake. A developer told me they will be building some homes around it and it will be very cool and those will be up close to $1 million. To give you a quick perspective to where CAROLINA PARK is, in relation to Charleston, if we were to drive out of here to downtown Charleston, it would probably take a good 30-35 minutes. You can get to the beaches of Isle of Palms and Sullivan’s Island, Isle of Palms being the closest, in about 15 minutes. There is a ton of shopping out here. As I mentioned at the beginning of the CAROLINA PARK video series, there is going to be a lot of commercial areas and it ties into Park West and the area we’re headed to in a minute, already has lots of commercial development.

Single-Family Homes from $439,000 by CalAtlantic in Carolina Park, the fastest-growing community in Mount Pleasant. Home sizes range from 2072 – 3298 Square Feet. Features a resort-style junior Olympic-size pool with child-friendly zero-entry, a nautical-themed playground, and tennis courts.  The community’s also close to numerous walking trails and provides access to beautiful beaches, great shopping at Mount Pleasant Towne Centre, and the rich cultural, dining, and entertainment options in historic Charleston. Carolina Park is also close to Park West Schools, including Wando High School, the Center for Advanced Studies at Wando, and the new elementary school. A daycare center and new fire station also are onsite, and a new library is on the way, while one of the region’s newest hospitals is only a half-mile away.