After three months of public input in person and online, the National Medal of Honor Museum has selected a new design based on what it heard from the community.

The design, called the “pavilion scheme” when proposed last month, is a similar design to the original design proposed in 2014, but architect Moshe Safdie lowered the height of the museum by 21 feet by moving the conference center into the pavilion section, which also includes lobbies and classrooms.

Daniels said the Foundation is working to design the interior of the museum with Patrick Gallagher, president and owner of museum planning and design firm Gallagher & Associates. Gallagher helped design the National World War II Museum in New Orleans, the Normandy American Cemetery and Memorial in France and several presidential libraries, among other projects.

Daniels said Gallagher’s involvement in the Medal of Honor Museum was one of the reasons he decided to become CEO of the foundation. He said the design of the exhibits will involve public input as it moves forward. “During the exhibition process, as we develop these narratives, it is really important to bring the community and all of our stakeholders, particularly the military side, along with the stories,” he said.

Gallagher said the exhibits in the Medal of Honor Museum have the opportunity to be life-changing to everyone who visits.

“This, for me and my career, is probably one of the most important museums I’ve ever worked on,” he said. “You don’t get to meet many people who are the quality of a Medal of Honor recipient.” 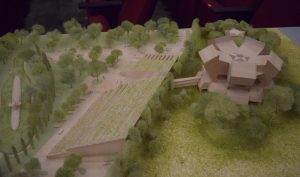